This evening, as Chaim was playing on my bed, he pointed to his diaper and said "poop." I checked him out and he was clean. I asked him if he wanted to go on the toilet, and he said "yeah." Five minutes later, the dirty deed was done. We clapped and danced and told him what a big boy he was, but I think he was too stunned that something acually came out this time to notice. Eventually we got him to smile, though... 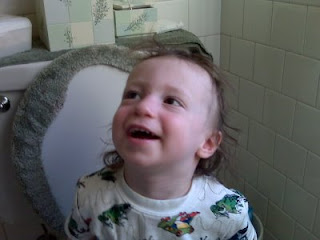 Posted by Unknown at 7:43 PM No comments:

Chaim is really talking up a storm these days - ever since his last round of antibiotics cleared up his ears (and his hearing) he has gotten the gift of gab. I'm not sure if he is comprehensible to anyone but us, but we sure get a kick out of all the new things he says and copies.

At the grocery store this afternoon, he pointed out all his favorite foods, like plums ("gum") and cookies. He did such a good job at sitting still in the cart that I offered him a high-five and said "sweet!" He promptly replied, "weet!"

Then, in the checkout line, he saw the man in front of us pull some change out of his pocket. Chaim pointed and shouted "gedakah!!!!" (tzedakah). The man was so impressed by his association that he gave Chaim some pennies to put in the pushka for charity. What a mitzvah boy!
Posted by Unknown at 3:20 PM No comments: 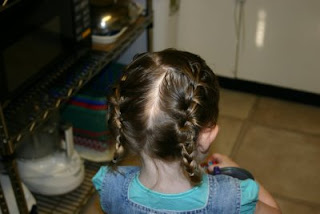 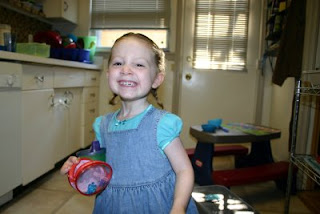 Is Miri's hair actually starting to grow, after three years? Well, certainly not at the rate of her rapunzel-like peers, but I think were are making progress. I was actually able to do french braids for the first time ever...
Posted by Unknown at 3:33 PM No comments: